Sacred Connections - my afternoon with Emily and Glenngerman


Every once in awhile, I hear a voice telling me to do something.
Yesterday, it said “Help them.”
I took an unusual route home from work yesterday, as I had a pile of bills I wanted to mail and had forgotten to swing by the post office that’s right next to work as I left. Ever lazy, I went to the only other drive up mailbox I could think of, which is downtown, and requires going around several blocks in a dizzying maze of one-way streets and leaves me heading the opposite direction of home
when I’m done… But still. Drivethrough.
So there I was, next to our lovely downtown mall on a sunny day and I noticed a couple cross the street in front of me. Dreadlocks. Guitar. Black hat. Tattoos. Dog.
“Help them.”
This has happened before.
I drove forward as the light turned green and they kept going down the block in the opposite direction. I had the usual argument with myself:  “I have to work.” “They might be dangerous.” “What could I possibly do?”
And then I swung around the block.
It took several one-ways and around-the-blocks and a prayer for an open parking spot, but soon enough I found myself running toward them as they crossed yet another intersection away from me. Jaywalking is up there with bank robbing on my list of offenses, but I had to. I was supposed to help them.
They stood on the corner next to the swankiest hotel in town, looking down at a painted-too-long-ago-to-read-clearly map of downtown.
“Can I help you find something?” I began.
“Yeah. The park.”
“Riverfront?”
“I think so.”
“That’s going to be back the way you were coming… about 4 blocks that way.” I pointed. Looked them straight in the eye. Argued briefly with myself again and then said “Do you guys need anything else? Do you need to do laundry or something?”
They looked at each other. She looked at her dog. He hesitated “Well…”
And then they both broke out in grins. “Actually, that would be great.”
I had an appointment in two hours and a car full of frozen food from Costco, but I piled them and their huge backpacks and Teeker, the dog in my car and we drove home.
“When’s the last time you called your moms?” It’s always one of the first questions I ask in these situations.
The girl, Emily said she talked to her mom about four days ago. The boy, whose name was long and new to me, and I suspected not his real name, didn’t answer.
We drove up the hill to my house. My mind was racing as I kept up a dialogue of small talk with my homeless friends, running through all the things I know my mom would want me to consider… the things my husband would say. Things like “Are you crazy?”
My only defense? “Jesus told me.”
We got to the house, found a place to tie up the dog since she didn’t think Teeker would play well with my dog, gave her a bone, then unloaded the car together (yay for help with a Costco load!) and started their laundry.
They stood awkwardly in the kitchen.
“Sit down! Make yourselves at home! Relax. We’re here for awhile anyway since you can’t go anywhere until your clothes are done.”
I made them lunch while we talked. They got their pick of all the food they helped me unload. They chose chicken strips and watermelon. I gave them each a San Pellegrino and sat down with them at the table.
And we talked.
We talked about how they get around.

Drug use in the homeless community.


Their families and mine.
She had matching symmetrical tattoos on her face. Tiny words in ALL CAPS on her cheekbones at the outer corners of her eyes. “F---  YOU.” I don't think she meant it.
He had the worst teeth I’ve ever seen. Including in Sierra Leone, where we volunteered for a dental screening with Mercy Ships. He said “No ice please” when I offered him a drink.
He also said “Thank you so much for your hospitality” Three times.
And “I’m having this surreal experience with my surroundings right now. I can’t remember the last time I ate a meal at a table instead of on the ground.”
We laughed together.
“People probably don’t make much eye contact with you, do they?”
“Oh hell no,” Emily said. “They want us to not exist. Not looking at us makes us less real.”
She told a story of asking a man next to her the other day for the time.
“I don’t have any,” he replied.
“I’m sorry, I just need to know what time it is.”
He repeated, more brusquely, “I don’t have any!” and walked away. He never looked up from his phone, which displayed the time just far enough away that Emily couldn’t quite make out the numbers.
They don’t do drugs. Well, except weed. But that hardly counts anymore, right? Emily told me she was addicted to meth and heroine until the guy that used to shoot her up (she never learned how to do it herself) disappeared one day. She didn’t realize he wasn’t coming back until two days into withdrawls, and she said she saw it as an opportunity. “You have to go cold turkey. Those people who go the methadone route just end up addicted to it. It never ends. I’ve been clean two years.”
I learned about Barterfests, which is how they will spend their summer. Traveling from one huge fair full of likeminded folk to another, trading skills, dancing, camping, making friends. I shared my only quasi-experience with something like that, the infamous ‘Country Fair’ outside of Eugene, Oregon that we used to hear horror stories of when we lived there.
The dryer finally buzzed, about ten minutes after she said “Do you think the clothes are done?”
She was getting antsy. It was a beautiful day and the park was full of people who might toss them a coin for a song.
“I’ll go get it.”
As they folded their tiny pile, (“It smells so good!) I wrapped the leftover chicken strips in foil and grabbed a handful of Clif bars from the pantry. We put their backpacks in the car, Teeker jumped in the front seat, and we drove back down the hill.
I asked them to write their names down on a post-it pad I keep in the car. “I want to use your names when I tell my husband about you…” (I needed to see Glenngerman’s name written so I could remember it.”) 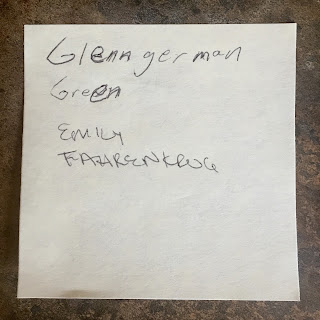 We got to the park. They got out, retrieved their backpacks from the back and Teeker from the front. I rolled down the window.
“It was great to meet you both. Good luck this afternoon! You should get lots of passersby since it’s so nice out.”
They both gushed thanks… “Thank you for everything. That was so nice… it was great to meet you too.”
Glenngerman looked me in the eye and said with conviction: “God. Bless. You.”
Indeed, friend.
Indeed.

Thanks for reading. I know some of you really want to give me a little lecture about safety and self-protection and common sense. I'll ask you politely to restrain yourselves and answer you with this:
1 John 4:18 & 19
There is no fear in love, but perfect love casts out fear.
For fear has to do with punishment, and whoever fears has not been perfected in love.
We love because He first loved us.

I love it when people talk back...

Popular posts from this blog

January 16, 2015
Waves of change sweep over me disturbing the delicate balance erected over years of false security held together by tradition heritage expectation. Those strong stalwart words that blow so easily away at the slightest crack. Revealing betrayal secrets testing carelessness. What I thought was is not. I cannot begin to adjust my sails. I am breathless, the wind knocked clean out of my heart and I gasp. Hollow chest slowly fills again with holy Breath. Peace in the crest of the swell. I still fear where the wave will land, but I ride it knowing I will not drown. I worship because It is all I know for sure. I will live in the pain - experience it fully knowing there is Promise in it. There is nothing I can control. But I know that knowledge is the beginning of true Peace. The fullness of Life comes when we feel dead.
2 comments
Read more

January 08, 2009
We were on our way back to the airport. We left Banta around 8:30 am. Our flight wasn't until 10:00 that night, but we wanted to get back early for a couple of reasons... First, I needed to get to the airport to retrieve my luggage. Someone had received a call the night before that it had arrived on a flight from London and was being held for me in the airline's office. We also planned to get a 'day room' at the hotel where we stayed the first night so we could all get showered and freshen up before our long flights home. And, because the airport in Lungi is completely non-computerized, the lines can be hours long - it's best to arrive early. The city of Freetown is built on a peninsula, as you can see on the map. The airport sits on the mainland, north of the peninsula, in Lungi. When we drove to Banta, (which is southeast of Freetown, unmarked on this map somewhere between Moyamba and Bo) the decision was made to drive around the inlets and avoid Freetown altoget
2 comments
Read more

September 14, 2020
"Siri, play John Mayer..." This is a go-to phrase when I feel overwhelmed by the shuffle-god's choice of music. I immediately want it to stop in favor of something familiar and safe. Today after I asked for my old friend to serenade me I heard these lyrics:  "No, I'm not color blind I know the world is black and white I try to keep an open mind But I just can't sleep on this, tonight Stop this train I want to get off and go home again I can't take the speed it's moving in I know I can't But, honestly, won't someone stop this train?" What an appropriate reprise for my mood today.  I've seen many, many 2020 memes. Most of them make me laugh. A Facebook friend posted yesterday on his wall "I forget - which plague is next?" We try to make light of an absolutely life-sucking year. It's an old defense mechanism with which I'm well-familiar. But occasionally something happens that isn't laughable. A friend from the Ca
Post a Comment
Read more